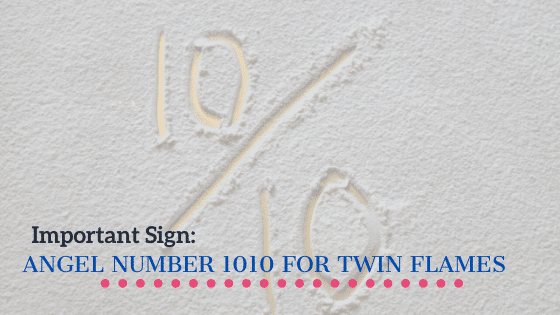 There are a lot of different patterns and signs you can look out for during a twin flame journey but the 1010 angel number is perhaps one of the most positive signs you’ll see.

Sadly, I spend a lot of time talking about false twin flames and the struggles people face during separation phases and difficult hot and cold stages of their journey. It’s nice to just be able to talk about something so positive for once.

There are various different numerology and angel number patterns that you might encounter during your journey. 1010 is one of the higher energy ones that you might repeatedly see without trying. Repeatedly looking at your alarm clock or phone and spotting the pattern 10:10 for example. If you’re seeing this, chances are your twin is too.

Important note: It’s entirely common for both twins to be experiencing patterns and symbols without consciously noticing them. Once you start looking for them you’ll spot them more and more but don’t worry too much if you aren’t consciously seeing them at the moment.

1010 is an interesting angel number for twin flames. Double repeating numbers is always a high energy symbol and on top of that, both numbers involved speak heavily to a twin flame journey. It acts as both a sign of a positive twin flame connection (though in rarer cases it is still possible to see a 1010 pattern in a karmic relationship).

Angel Number 1010 is a symbol of spiritual growth which is exactly what you want to see in a twin flame journey. It’s a sign of success on your path so far but this is no time to sit back and rest. There’s still more work that lies ahead for both you and your twin.

It’s a sign that you’ve both reached a new stage in your journey and that you still have more work ahead of you. Success and happiness are going to lie ahead but you’re going to need to hold your faith during that time.

The Number 1 in Twin Flames

Angel number 1 symbolizes independence, motivation, forward momentum and progress. In terms of a twin flame journey, it’s a sign that you’re currently progressing and change is coming. Usually, in the relatively near future. It’s important to note that this doesn’t necessarily mean you’re about to reach union, merely that you’re about to reach a new phase in your spiritual journey which will bring you closer.

It’s a positive sign though and the number 1 is the angel number for positivity.

The number 1 also has ties to certain Tarot cards which suggest a twin flame journey like The Sun and The Magician.

The Number 0 in Twin Flames:

The number 0 is the divine number. Zero represents a spiritual journey which is exactly what a twin flame journey is. It’s perhaps one of the strongest confirmations out there that you’re on a true twin flame journey.

If you’re looking for further confirmation than this pattern alone, consider getting a twin flame reading for your journey. 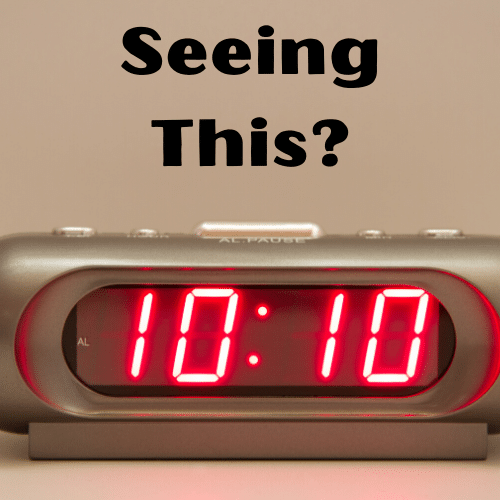 What Does Angel Number 1010 Mean Generally?

The 10:10 meaning is always going to sound like a twin flame sign to anyone going through a twin flame journey.

It’s a symbol of spiritual advancement. A call to focus on our spiritual awakening and staying positive on the road ahead as we continually improve ourselves. It’s a sign of both reaching a new stage and having work still to go ahead of us.

1010 in numerology is generally a rare pattern. There isn’t many instances where you’ll have two repeating numbers like this but I think you probably see it more often in twin flame journeys than anywhere else. I certainly hear about the pattern often enough.

If you’re familiar with twin flames (and I’m assuming you are since you’re reading this) this is all likely going to ring a bell. It’s entirely possible for someone to see the angel number 1010 without being with their twin flame. Now, whether or not their twin flame has anything to do with that on the 5D as they seek them out – that’s perhaps another matter.

Why Do Twin Flames See Numbers?

It’s tough to say for certain where they come from. After speaking to literally thousands of people going through various stages of their twin flame journey there’s certainly a trend seeing them but the root cause of them – nobody really knows for sure. Perhaps it’s your twin flame trying to get your attention from the 5D, perhaps it’s yourself trying to draw attention to something or perhaps it’s something else in the universe entirely.

Watching out for these signs is an important part of a twin flame journey whatever the cause of them and they can help guide you onwards. Seeing 1010 on the clock doesn’t automatically mean you’re ready for union with your twin flame but it’s certainly a good sign.

If you’re looking for further guidance than seeing the 1010 angel number pattern – take a few minutes to provide the details and get a twin flame reading.