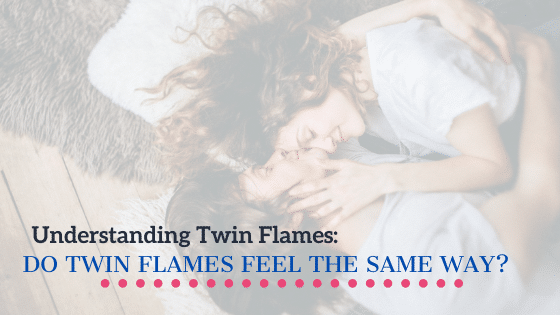 After hearing thousands of twin flame stories one of the more common questions I hear is do twin flames feel the same about each other? But (unhelpfully) the answer to this is both yes and no.

As with most things in the twin flame journey, things are rarely that simple or black and white. It’s the nature of the journey but I’ll do my best to give you a helpful answer. If you’re looking for something more specific to your journey consider getting a twin flame reading.

If you don’t know whether or not your twin flame feels the same about you then I’m going to assume (like the person who sent this message) you’re going through a difficult separation stage. At the union stage, the answer becomes a pretty easy yes but by that point, you don’t need me to tell you.

During the separation phase is when it’s both yes and no.

On the higher level (you’ll commonly hear this referred to as the 5D or higher self) both twin flames feel the same about each other. That bond is there and manifests itself across many different lifetimes. It’s hard to put into words exactly how strong a bond this is because it’s unlike anything else.

… And that’s a double-edged sword.

The strength of that connection once you’ve reached union is nothing but a blessing. During a painful separation stage when the runner twin is acting out it can feel like more of a curse.

One of a million things might happen. They might run to a false twin flame, they might completely block you or even change countries to get away from you. That has happened more times than you might expect.

This doesn’t happen because they don’t feel the same way.

It happens because they simply don’t understand how they feel. The strength of a twin flame meeting doesn’t fit into their experience of a traditional 2D relationship. On one level they feel the exact same way but they just can’t process it properly.

This is exactly why we end up in a separation stage.

It’s painful and it’s frustrating but it’s part of the journey.

So… Do Both Twin Flames Know?

On some level, both twin flames know. You knew even before you started reading about twin flames. It’s very likely the two of you already met in another lifetime and you both knew then as well.

Sometimes both twins might be aware of what a twin flame is and one may be in denial about the journey they’re on with you. Sometimes they might not even be aware of twin flames at all.

On some level, they know – but that doesn’t always mean they’re going to act the way you’d expect. It can seem illogical to you when the connection is so clear to you but while they experience the same thing, they just don’t fully understand what it is they’re experiencing.

That’s what it really boils down to.

Does My Twin Flame Feel What I Feel?

There are several levels to this one.

As we’ve already covered they feel something but as your journey progresses this starts to show itself in different ways. A link develops between the two of you which can share thoughts and emotions. We’ve covered things like feeling your twin flame crying but this level of connection goes through the same fate as their knowledge of the connection overall.

When your twin flame feels your emotions like this they’ll still not understand what they’re feeling. It might manifest itself as a sudden urge to call you or they might experience the same emotion but without understanding that it’s coming from you at all. Depending on where you are with your own spiritual journey you’ll experience the same, but as the more spiritually advanced twin, you’ll have a better understanding of why.

Twin flames have a telepathic bond but it doesn’t show up immediately like something out of Hollywood. It takes time for it to develop and for both of you to understand it properly. It’ll evolve as your journey does but, sadly, it doesn’t mean they’re going to feel what you feel during a separation phase.

Should I Tell My Twin Flame How I Feel?

If your twin flame already knows how you feel, should you tell them? Will it help?

Sadly, this is another area where it’s hard to give a simple yes or no question. In some situations, I’d usually say yes. Honesty is the best policy. The separation phase sometimes requires both of you to have little room to breathe and grow before you’re ready to reach union but at some point, you’re going to have to put it into words. On some level, your twin flame already knows how you feel but it can help your journey along to put these feelings into words.

As frustrating as it can be, sometimes being patient and giving them room to work through things on their own is the best way to go. If you’d like a reading for further guidance on your path ahead together: