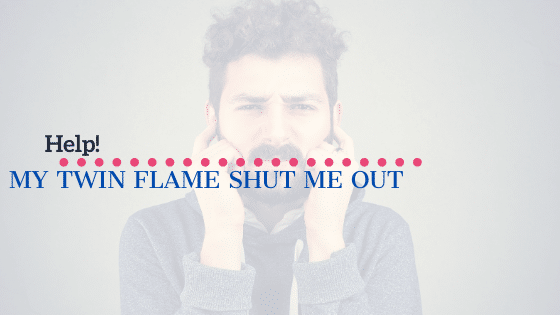 I’ve had enough emails now with the subject my twin flame shut me out that we’re going to need to look at it. Why it happens, what it means and what you can do about it.

Firstly, I know how painful this can be. When your twin flame shuts you out they’re not doing it to hurt you, nor does it mean this isn’t a true twin flame. Shutting you out is a self-defense mechanism for a level of connection they weren’t prepared for. It happens because you’ve met too soon.

The solution to both making it easier on both of you and getting through it towards union starts with understanding why they’re doing it.

Why Does My Twin Flame Push Me Away?

If you haven’t read it already, take a look at my twin flame separation guide this phase of the twin flame journey is painful – but it’s a pattern I see in twin flames time and time again and while it’s never going to be an entirely easy experience (for easy of you) the reason is always the same.

In short – if your twin flame shuts you out and pushes you away it’s because you met too soon. Neither of you is ready for union and their reaction of rejecting you is the only thing they know how to do. On some level, part of this is protecting you to because the pain of shutting you out probably seems preferable than causing more hurt between the two of you.

Your twin flame is shutting you out not because they’re trying to hurt you but (essentially) because they don’t consciously understand the journey you’re on. They’ll know it on some level but it’s this level which is basically triggering a spiritual fight or flight response. We commonly call this soul shock.

It doesn’t mean you’re not on a twin flame journey.

It doesn’t mean you’ve failed to reach union or that you’ve done anything wrong.

Make sure you understand this part before moving on.

You might have heard me say before that no two twin flame journeys are ever exactly the same, and this is entirely true, but this phase isn’t unique. It might manifest in different ways but (and this is just to prove my point of how common it is) here are some topics I’ve previously covered:

This phase of your journey can manifest in many different ways but always with the same root cause.

Sadly the twin flame separation pain is all too normal and something most of us have to deal with. It’s incredibly rare that you both are lucky enough when you’ve already done all the work you needed already.

So it’s normal. That’s a start but what do you actually do about it?

How to Stop Them Doing It

The first (and most important) thing is you need to take charge.

This doesn’t mean yelling at your twin flame until they stop shutting you out. As tempting as that might be, it’s never going to go the way you’re hoping. Trust me, I tried that long, long ago.

If the twin flame runner feelings are dictated by their fear of the connection then it’s probably time to remind you of twin flame mirroring. If they’re not ready, it’s because you’re not ready either.

Don’t fall into the trap of blaming them or waiting for your twin to ‘figure it out’. This is the road to dragging out the pain and separation between the two of you. Not taking charge and doing what you can to bring you both together can mean this stretches out for potentially years.

A twin flame relationship is only ever going to take a step in the right direction when you can set your own ego aside and focus on your own healing. Doing so will trigger the same growth in your twin and bring you both closer to union.

But it isn’t until you surrender to this process of self-love and healing that you’ll ever get beyond the hurt and pain of the earlier stages. Once you understand the twin flame runner’s feelings and why they’re acting this way you can begin the process of working on yourself instead of focusing on what they’re doing.

If you’d like more specific guidance, take a few minutes to tell me about your journey and get a twin flame reading.

What Happens If You ignore Your Twin Flame?

This is not the answer either.

Focusing on yourself and your own healing does not mean you have to ignore your twin flame and shut them out as well. While I completely understand why you feel that way it’s not going to help you in the long run. Believe me on that.

While you work on yourself, keep the lines of communication available to your twin. It might be that the moment you begin true healing they’ll reach out to you. It might be that it takes a while. Either way you don’t want to slow things down any more than they already have been.

It is technically possible for twin flames to fail in a single lifetime and while you’ll never truly forget them, you could try and ignore them. Considering how rare this connection is it’s a wasted opportunity for happiness beyond anything else. Twin flame love might not come easy but it’s worth every moment of the struggle.