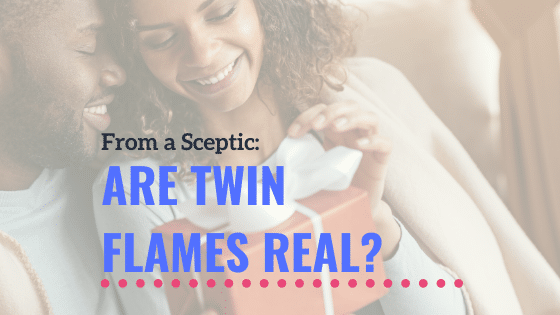 Doubt is a huge part of a twin flame journey. It’s completely understandable and perfectly normal. Asking are twin flames real? is all part of the journey.

You might ask this question before you meet your true flame. You might be dealing with the rough separation phase where doubt is normal and perfectly human. You might (and this is very common) be almost close to the end of your path and about to achieve union and still be doubting. We’ve looked at this in more detail when we covered twin flame stages but I completely understand your doubt.

In fact, I’m not even going to try and convince you. I’d actually like to (briefly) share my story.

My Own History of Doubt

I write for one of (if not the) biggest twin flame sites around and I wouldn’t have believed a word of it if someone had tried to explain this to me. It wasn’t until I first felt soul shock meeting my twin. It knocked me off my feet. Utterly changed my life (very much for the better).

Even after that initial meeting during the running/chasing phase, I began to have my doubts again. It’s actually a good thing that this is part of the journey. You can wind up wasting a lot of time and getting hurt badly if you let a journey continue too long with a false twin flame it’s important to be sure and keep yourself on the right track.

During this phase, however, I hadn’t even heard that term. I had no idea what was going on or why I was feeling that way. Looking back, it all makes sense but I can completely understand why someone would question it.

I was always very cynical about relationships in general. Very matter of fact. You can be happy with someone one moment and done with them the next. That’s life.

And then there’s a twin flame connection. I’ll never really try and convince someone to believe the same as I believe. What I will say is that when you meet your real twin flame – you’ll understand.

If you know you’re on your journey and you understand this type of connection then it might not be the overall idea of twin flames you’re questing. In fact for some, if you’ve experienced soul shock you’ll sometimes forget how easy it is to question it, to begin with.

What is very common is to question not if twin flames are real – but if you’re currently with your real twin flame.

Sadly, this happens far too often. Especially when we confuse a connection like a kindred spirit with a soulmate. You might think you’ve found the one but things can turn… nasty. Quickly. A false flame is (fairly) normal but not something you should ignore. It not only causes a lot of emotional, spiritual and (sometimes) physical pain – but it slows down your spiritual enlightenment with your real twin flame.

Questioning and doubt are perfectly normal. Part of the journey. Something you should be doing.

When I do a twin flame reading with someone who is nearing the end of their separation phase or before meeting their flame there’s almost always doubt. Doubt they’re with the right person or doubt they’ll ever meet them at all.

In a lot of ways it’s good you’re questioning this. It’ll push you further down the right path.

One of the biggest misconceptions about twin flames I often see is mixing them up with soulmates or kindred spirits. This can actually be counterproductive and lead to more false flame encounters than your journey actually requires.

I’ve covered the difference in twin flames and soul mates before but here are the bullet points:

Most of us intuitively know they have a twin flame. Even if they’re not consciously aware of it – unless it’s something we’re trying to fight against actively it’s kind of just… known.

It’s not like I can pull up a scientific study here to show you. Like anything ineffable, a lot of this stuff is up for debate and I could show you countless pieces of anecdotal evidence and it might not mean anything to you. And that’s alright.

The Discussion about the Truth on Twin Flames

It is the internet and you know what they say. Opinions are like assholes, everybody has them.

The idea of ‘proving twin flames are real’ or otherwise is the same as proving (or disproving) the existence of a god. It’s an argument as old as time and doesn’t really get us anywhere. On that note, twin flames are actually touched on in several religions.

Like any member of the human race, I’ve had a crush on someone. I’ve felt lust or infatuation. I’ve struggled to get this person off my mind when we’re apart but what’s the difference in this and a real twin flame connection? – or is there one?

This answer does make a compelling argument that some people convince themselves of a twin flame connection that doesn’t really exist. I firmly believe this can happen to some people.

People who are over obsessed with this feeling that they are twin Flames but are really not. Such people are more insecure, generally do not seek answers from their inner wisdom and get busy in reading everything they can, discuss things in groups, have debets etc.) They keep asking very mundane questions on forums like Quora.

It is a clear example of how they are trying to relate to this concept somehow and have not really awakened to it. When it comes to such people, spoon feeding is more than seeking, making effort to go within is completely absent. (These people will probably discard twin flames later, claiming that this is all a fad, and will move on. The number of people in this category will be larger than true twin Flames.)

But this doesn’t actually disprove the existence of twin flames. It doesn’t prove it either – the point I’m trying to make is that you can absolutely convince yourself of a twin flame connection when there isn’t one. You might just be lusting after someone and it’s not like there’s a physical chart you can measure the difference by.

Before you head for the contact page, please don’t try and describe your relationship to me and ask if they are your twin flame. There’s no way I can answer that question. There are way too many factors involved – but I can help you decide for yourself.

What I can say is that once you’ve actually felt a twin flame connection – you’ll know the difference.