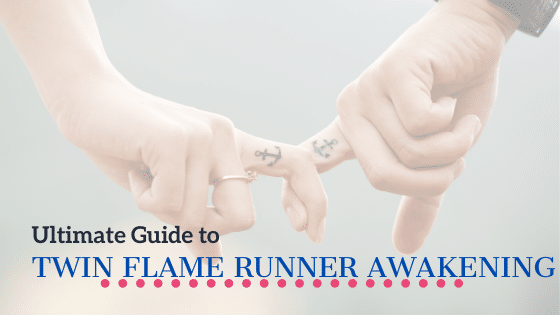 Every relationship (twin flame or otherwise) has low points and high points and a lot of the same feelings are present – the difference is certainly the intensity. We recently looked at the twin flame separation stage and how intense that can be – but the twin flame runner awakening can be a whole other beast.

We’ve already talked about the running stage to death. To the point that I’m pretty sure people are sick of me talking about twin flame runners – but that’s a tough stage for both twins so it’s the one we do get asked about the most. So, I thought it was time to look at the twin flame runner awakening.

What happens, what to do and what are the signs?

Waiting For your Twin Flame Runner to Awaken

By far the toughest stage when you are waiting for the runner to ‘come to their senses’. I’ve said it before (and there’s little doubt I’ll end up saying it again). The separation stage doesn’t always happen but it’s pretty common. The twin flame runner isn’t trying to hurt you intentionally and there are a bunch of reasons for them to be running. In the long run, it can even be a good thing and lead to the two of you being together sooner. The twin flame runner awakening may take from months to years; but sooner or later, they will come back to you. During the separation time, you are not the only one with the thought of your twin flame in their minds. They are also thinking about you every day.

I know this generally begs the question ‘but why are they running then?’ but there is a reason for it.

Let’s look at one of the more common issues. Should you spend your time thinking about them and waiting for them to return (not that you always have many choices)?

Let’s first scratch the surface of what you are asking. Is it counterproductive to continue to hope and fantasize about your twin flame awakening? The answer all depends on how much hope and fantasy you allow yourself to have. Hope and fantasies occupy the same rubric as dreams and dreams are a wonderful thing, but eventually, you must wake and take action in your life.

Some of the best advice you can find comes from fictional characters. As Albus Dumbledore once wisely said: “It does not do to dwell on dreams and forget to live.”

But, the best thing is the twin flame runner awakening by the end of this hard phase. There are times when things don’t work out, and people part their ways. However, things are a little different in twin flame relationships. Yes, there will be hard times, and they will part ways, but not for long. The separation period could last for months, and in some cases, it could last for years. But, this period will end someday, and they will both get back together.

When we talk about the twin flame runner awakenings, there are several factors that are involved there. Let’s have a look at the things that make the runner realize what he has left behind in life.

Twin Flame Runner Awakening: Reasons to Get Back Together In many twin flame runner stories, the runner tried to find love again but wasn’t able to love anyone else. This is because once you meet your twin flame, no other person will look as attractive as your other half. It will be like looking into a mirror and finding the same habits as yours. You will find everything in that person that will make you fall in love with him.

But, you won’t be able to find the same qualities in anyone else. Also, even if you find another person who looks right at first, he wouldn’t stand a chance against your twin partner. At this point, the twin flame might realize what he has left behind. This could be the start of the twin flame runner awakening.

We’ve looked before at false twin flames and how easy it can be to mistake them for a real connection. This only really applies before you meet your twin flame physically. Once you’ve been hit with that kind of feeling you’ll instantly be able to tell them apart.

It might not be too difficult in the beginning, but living without the twin flame will get harder with every passing day. But, he won’t find any other person attractive. This will be because of the fact that he might not be ready to give it another go, but his soul and heart will always belong to his twin flame. Once you meet your twin flame, it becomes impossible to get attracted to someone else. This could awaken the runner and encourage him to go back to his other half.

It is possible for a twin flame journey to fail in this lifetime. When we make this kind of rare connection we should take advantage of it. This is one of the main things we look at when doing a twin flame reading. It’s so important to make the most of these connections and try to make it to a union.

Another reason for the twin flame runner awakening could be the lack of spiritual calm. When we try to fight destiny, we end up hurting ourselves. We don’t realize we can’t change what is destined to happen. But, we don’t give up either; we try our best to make a change. In the end, we end up realizing that these powers are beyond our control. The same happens to the runner, and he doesn’t find peace in anything. It becomes difficult to find inner peace. This is where the runner realizes that moving away is not an option.

When twin flames are together, they stay happy no matter how life treats them. They grow together and find every difficult situation with courage. But, when they are not together, happiness is hard to find. The same thing happens to the runner as well. The twin flame runner’s feelings are the same as that of the chaser. The only difference is that the runner tries hard to stay away. However, when the runner doesn’ find happiness in anything, it could awaken him. He won’t find happiness in staying with his family or doing the things he likes. This is where he will realize that his life revolves around his twin flame partner.

Signs From the Universe

I often tell people they shouldn’t wait for a sign from the universe when it comes to a twin flame journey. I’ve seen people waste time doing nothing to further themselves down their spiritual path and use the excuse of waiting for a sign. However, while I don’t suggest you should just wait for it, there are certainly signs you can notice when the awakening is drawing near.

Getting signs from the universe could also be a reason for twin flame runner awakening. He could keep running to his other half again and again. Twin flame runner symptoms could play an important role in his awakening. The same symptoms that he experienced at the very beginning of the relationship could play a role in awakening him. The runner could keep seeing the other half in his dreams, and this could happen often.

Moreover, the runner could feel the pain of the chase even though they are not together. This pain of his partner could make him come back. This is the most common reason for the awakening of the runner.

Well, these are the reasons for the awakening of a twin flame runner. This is how destiny works; you can keep trying, but you will end up where you are destined to be. The runner realizes that he can’t fight destiny, and this leads to a new start for the twin flames. Both the partners love each other and express their feeling to each other clearly this time. This makes their bond more special and stronger than ever.

The Role of the Chaser in the Twin Flame Runner Awakening

The chaser also plays an important role in the awakening of the runner. However, his role isn’t as direct as one might think. The runner needs to realize these things on his own, and the chase should give him space. The only, yet the biggest thing that the chaser needs to do here is to give the runner time and wait for him. It will be hard, but the best thing is that the runner will come back to him.

We know that the separation period in a twin flame relationship is inevitable. However, the duration of this period could be shortened if both partners make the right decisions at the right time. If one person is feeling insecure, the other should try to encourage him and then wait for him to realize things on their own.

But WHEN Will They Awaken?

Oh, the amount of message I’ve had about this. When will the twin flame runner stop bloody running?

Firstly, and this will probably come as no surprise to anyone, there’s no 100% set answer here. I can’t give you a number to set your countdown by because it isn’t a matter of time. It’s a matter of being ready – and this happens at different stages for everybody.

Think of it as a preparation stage. Something which needs to happen in order for both of you to be happy and both the chaser and the runner are doing what they need to do to find each other in the end.

Finding your Twin Flame is worse than finding a needle in a haystack. And navigating the stages after that can be just as tough. So many questions and so few answers. How do you know if you’re doing the right thing? This free audiobook download has pretty much everything we know on Twin Flames and should keep you on the right path.

Signs of a twin flame runner starting to awaken can vary wildly. But a few common examples from one of our readers:

Like I always say, no two twin flame journeys are ever entirely alike so these are just examples remember. You may see some or none of these on your own path.yo

What SHOULD You Do?

The risky part to all of this is that when the chaser (that’s probably you in this situation) continually tries to get the runner’s attention and convince them to stop running – it can actually be counterproductive. It can push them further to fleeing from this internal conflict they’re trying to work through.

As they’re beginning to show signs of awakening it’s important for you to be available to them without rushing the intensity too much, too soon.