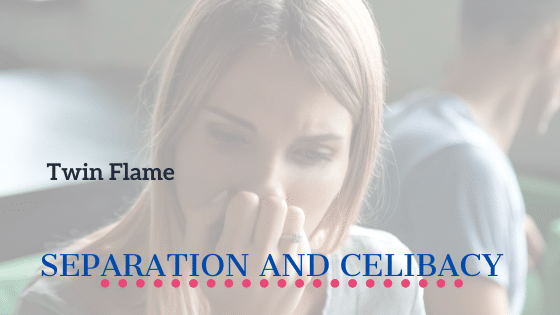 The topic of twin flames and celibacy is an interesting one and opinions are always going to differ. There’s no right or wrong answer here. Some feel the twin flame connection supersedes physical relationships so celibacy isn’t necessary. Others feel like they’re cheating in some way.

As with a lot of things in the twin flame journey, a lot of this is going to differ between different people.

I know I say that a lot but there are just so many variations it’s hard to cover everything. There are no two twin flame journies that are ever going to follow the exact same path which is why, if you’re really stuck, a twin flame reading can help look at where you currently are and what you can do to make it to the next step.

This is an example of on twin flames experience with the issue:

I have only experienced short intervals of separation ” physical” separation, the magnitude of pain and suffering is too heavy to bear for a human being, she and I later found out that we feel exactly the same during those short separation periods, a feeling similar to being crushed by a very heavy load continuously…. so, separation is not really an option for me or her, I tend to think that a long separation might be fatal, therefore celibacy or no celibacy was never a noticeable issue, we are just normal people, I suppose and hope: ).

Finally, Twin flames/ soulmates are connected by a magnetic force similar to the one you feel when you place two magnets close to each other, the force is there, but it’s invisible, the connection between the T. F/SM is just similar to the connection that exist between two magnets, and the point is, there is never a total separation between the two “souls” that have finally found what they have always sought consciously or subconsciously, and yes, all humans are always and in every second are in the process of “continually seeking” the missing part( half) of their “souls”, but our current reality makes it harder for people to find their missing half.

If you want the simplest answer from me, and I have to say that this only applies to me, others may feel different, but, just the thought of cheating during separation or otherwise is too scary for me to even imagine, I think that if I cheat on her, my life will be devastated, if she cheats on me, the same, my earthly life will be devastated beyond repair, and the point is, yes, celibacy is a must if it means “cheating”, but celibacy between the twins is impossible, at least in my case.

Understanding your Twins Side of the Issue

I’m struggling to say it doesn’t matter when it comes to the issue of celibacy and twin flames because it’s hard not to be hurt when your twin flame does something during the separation stage which hurts you. But the reality is they’re not trying to hurt you.

They’re maybe trying to subconsciously help the two of you in the long term.

Why we’ve been experiencing our own personal dark night of the soul, and slowly but surely waking up, we have, of course, constantly wondered what our twin was going through. On a soul level, we’ve felt their pain and their love, but without contact, we’ve had no idea what was going through their head. We know from the abruptness or cruelty of their departure that they’re angry, and that they’re scared. We know that they’re scared because we were scared too; scared of the intensity, scared of how deep the need was, and scared that we seemed to no longer have any control over ourselves.

My twin had always thought of himself as someone who was very in control of his emotions; almost indifferent, and yet, suddenly, he was pining, and affected, and overwhelmed. Shortly before he cut me off, he said that until the time came that we could be together; he just wanted to feel ‘normal again.’ I knew what he meant because it felt like we were in the grip of something so huge that it had taken us over. And of course, I understand now that we simply weren’t at a level of consciousness where we could cope with the intensity of what we’d found.

Finding your Twin Flame (and getting through the journey) is worse than finding a needle in a haystack. So many questions and so few answers. How do you know if you’re doing the right thing? This free audiobook download has pretty much everything we know on Twin Flames and should keep you on the right path.