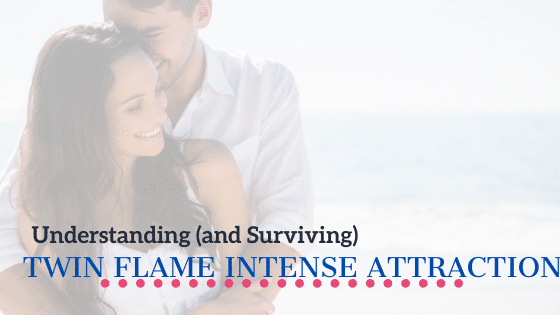 There’s a lot of talk about the twin flame intense attraction at various stages of your journey. That overwhelming feeling that tells you this connection is something else and unlike any other 2D relationship you’ve ever experienced so far.

Does this intense attraction indicate a true twin flame journey?

It’s absolutely certain that when you meet your twin flame you’re hit by something beyond any other kind of attraction you’ve felt so far. Both twins are going to be hit by this intense attraction usually both physical and emotional. You’ll just click together. Moreso than you thought would be possible.

Often they’ll not be someone who is not necessarily ‘your type’ and (sadly) this can sometimes happen when one or both twins are already involved in traditional 2D relationships. It can happen when you weren’t looking but there’s an unmistakable wave of energy between the two of you.

There are downsides to this intense attraction.

It’s common for one twin to be further behind on their spiritual path than the other. Given that you’re here, it’s likely you’re at least somewhat familiar with the idea of twin flames but the intense attraction of twin flames is often too great for someone who doesn’t understand what they’re experiencing.

This kind of intense attraction often causes one twin to panic and retreat. Often giving you (and themselves) an excuse they’ll flee back towards a more traditional 2D relationship because that’s what they know. They certainly experience the same level of attraction but they won’t always handle it the same way.

It’s also important you understand that feeling this kind of attraction doesn’t immediately mean this is a twin flame. I’ve covered the dangers of false twin flames in detail already so I won’t get too far into that again. Just keep in mind that it can be very tough to tell this apart from a false twin flame just on attraction alone.

Remember that no two twin flame journeys are ever exactly alike. For some, this initial attraction starts and doesn’t change at all, others might go through some hot and cold turbulence for a while and for some the journey can start on the entirely opposite side of the spectrum with hate or discomfort. It’s rare, but this kind of energy hits people differently sometimes.

If you’re looking for guidance on your journey, consider getting a twin flame reading.

Why is the Twin Flame Attraction So Powerful?

There’s a very good chance you’ve felt attracted to at least one person before. Something about the way they think, act or look is attractive to you and you feel drawn towards them.

Sometimes this can be a powerful feeling and we use words like ‘smitten’, ‘infatuation’ or even ‘obsessed’. This kind of 2D attraction pales in comparison to what it feels like when you meet your true twin flame.

It’s often described as a magnetic pull between the two of you. Symptoms of this connection can vary from signs of a telepathic connection with them to the patterns and signs the universe hurls your way.

The Hot and the Cold Phases

While this intense attraction will never fully die down it’s entirely normal to go through hot and cold periods. The role of the runner and chaser twin often flips and twin flame relationships can come together and apart many, many times.

Often taking new forms each time you come back together, you’ll both feel drawn to each other no matter how many times you think it’s over. At its root, the twin flame journey is about pushing you both down the spiritual path of self-improvement together.

Although these separation stages can be painful (I know, I’ve been there) it’s not a bad thing or in any way a problem with your journey (although I know it can certainly feel like that). It happens because one or (more often) both twins are not yet ready for union yet.

You’ve met because you’re partly ready to take this spiritual step together. You’re in separation because you’ve still further to go.

This can lead to conflicts, fights, third party relationships and a host of other problems. These are signs it’s time to release emotional baggage and focus on moving to the next step. Regardless of which one of you is running – it’s both of you that need to grow.

This Attraction is Divine – Not Driven by Ego

I’ve spoken to literally thousands of people about their twin flame journey and one of the most common things I hear is that their twin isn’t normally ‘their type’.

In 2D relationships, we commonly choose someone by ‘ego’. We decide because of external factors like physical appearance, financial security or a host of other factors. For many people this lifetime, that’s as good as they’re going to get.

In this type of relationship, both sides look for stability and resent change. If one tries to grow too much it’s going to be resisted and cause strain whether they’re conscious of it or not.

In a true twin flame journey, this is never an issue. Both twins push each other to be the best versions of themselves. This extends to every aspect of your life from personal and spiritual to your career.

Meeting your twin flame is a catalyst for spiritual growth and improvement. This type of connection is based on more than just finding someone who looks good the day you met them.

It’s a connection to span lifetimes.

Twin flame energy is electric. Whether you’re together or physically apart, the connection between two twin flames drives you both onward. It’s a connection that is 24/7.

Let’s put it this way.

Many people going through long separation phases feel like they can no longer be attracted to anyone else. No matter how long it’s been or what their runner twin flame is doing, there’s just not another connection like it.

Much of this is hard to put into words. It’d be easy for me to say “You’ll know if when you know it” but that’s obviously not going to get you too far.

How Do You Know if Your Twin Flame Loves You?

Trying to navigate any kind of relationship is difficult enough. Trying to understand if this intense attraction is part of your journey or just another false twin flame connection distracting you is never easy. Take a few minutes to tell me about your journey so far and a reading can help give you guidance.