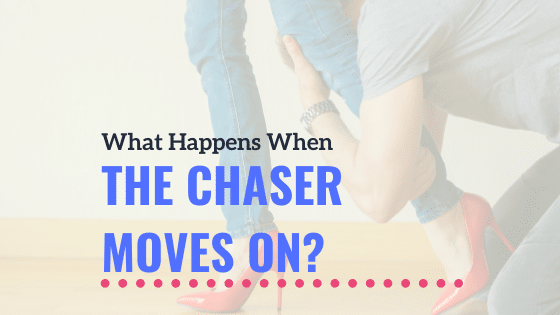 Out of all the questions I’ve got over the years – this one is probably more common than you might think. What happens when the chaser moves on? Does the runner do anything for them to change their mind? Does the runner even notice?

As with most things in a twin flame journey – it depends. One of three things can happen:

Understanding which is going to happen here can be tough. We can do a twin flame reading to look at your specific situation or try and get a better understanding of the twin flame stages overall with this free twin flames audio-book.

So, first up, it’s fairly normal for the runner and chaser to reverse. If the twin flame chaser decides it isn’t worth the pain they might well start a relationship with another and inevitably they’ll either return to being the chaser – or they’ll become the runner and the original runner will become the chaser.

This happens – more often than you might think. The separation phase is long, demanding and emotionally bruising. And that’s when you know you’ve found your real mirror soul. If you include the chances of false twin flames it gets even worse.

I’ve covered the possibility of twin flame failure before – but I can sum it up in one line for you. It’s not technically possible for a twin flame journey to fail in the long run. This does not mean you’ll achieve union in this lifetime, however. This is why we can’t just sit back and wait for the universe to sort things out for us.

I Understand Why You Would Move On

I’ve been through my own time flame separation phase and I’ve spoken to hundreds of people who have gone through it as well. I completely get why you feel like you want to move on.

It’s not your fault. It’s not a reflection on you, your twin and it doesn’t mean that you haven’t found your true twin flame or that you won’t achieve union in this lifetime.

It’s a fairly common part of an emotionally and spiritually brutal phase in the journey. In some ways, it’s good you question the connection. If we took every strong connection as a sign we need to devote our lives to someone without question – we’d get hurt a lot more often by false twin flames or infatuations.

Does My Twin Flame Runner Miss Me?

This is one question on twin flames I can answer with 100% certainty regardless of who it is.

I’ve spoken about twin flame telepathy before and the constant connection both mirror souls have with each other before they even meet. Whether they’re consciously aware of it or not – the twin flame runner does miss you. There are signs when they’re thinking about you and sometimes it’s the moment you actually move on that they’ll switch and begin chasing you.

Sometimes it takes a little longer.

Sometimes it won’t even happen in this lifetime.

But they do miss you. The same way as you’ll still miss them even if you do genuinely move on.

If they’re going to miss me and potentially become the chaser the moment I move on – why don’t they just awaken now and save us both the pain?

Ah. If only it was this easy. But at least the answer can be summed up – soul shock.

It’s important to remember that the runner isn’t trying to hurt either of you. They’re not actually trying to do anything. They don’t fully understand what’s going on and they’re not spiritually awoken enough to be able to handle this level of connection yet. It can be tough to accept as the chaser (trust me – I’ve been there).

Maybe (and this is just a maybe because I don’t know your current situation) you’re not real twin flames and while this stage is painful at the moment it’s better for you both in the long run.

I do wish I had a better answer for you here.

Sadly, twin flame journies are a great many things but easy is not one of them. There’s no easy answer or way to know if the twin flame runner misses you because honestly, they might not even know themselves. It really depends on how spiritually awoken they are.

Keep in mind just because they don’t appear to miss you now doesn’t mean they don’t or they won’t in the future.