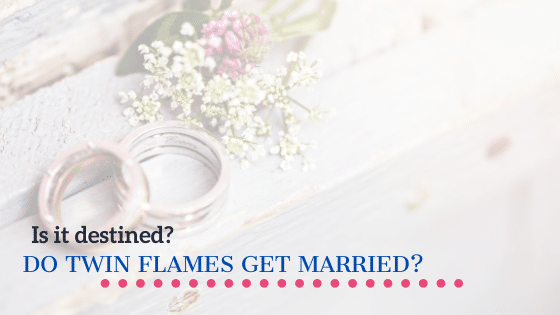 If I ever put together a twin flame FAQ… it’d be a very long list. It can be a difficult journey and full of doubt about the road ahead. Do twin flames marry? Would have to make that list though so I thought we’d take a look at twin flames, marriage and why it almost doesn’t matter.

If you’re currently dealing with a separation phase and looking for guidance on your twin flame path ahead, consider getting a reading.

This is a bit of a loaded question and it’s important we answer it… carefully.

I’m well aware some resources are going to say yes. The truth is it’s a little more complicated than that and we need to break the question down a little.

Do Twin Flames Marry When They Reach Union?

Assuming you reach the end result of a twin flame journey and achieve union with your twin – does it end in marriage?

As I always say, no two journies are ever the same so this really comes down to the couple. More often than not – it results in marriage. However, as I’ve touched on before when we looked at what happens when twin flames are already married, a twin flames union goes beyond marriage.

The actual decision to get married or not is always down to each couple but at that stage, it’s more of a formality than anything else. There’s nothing that is going to top that kind of connection. Some twins may decide not to marry at all, others might do it just to make the relationship easier to understand because society expects a marriage and some get married because they do actually want to.

Trust me, once you reach that union stage you’re not really going to worry about the rest.

I’m not being dismissive of marriage but it’s important not to distract yourself from the journey ahead. If marriage is what you’re hoping for then there’s no reason for it not to happen as long as you reach that stage (which we’ll get to in a moment).

Do They Always Reach This Stage?

While I prefer to focus on the positives of the twin flame journey there’s a good chance you know at least one person who hasn’t married at a later stage in life. I’ve covered twin flame failure before but the short answer is you’re not guaranteed to reach union with your twin flame in a single lifetime.

Technically in the longterm twin flames always get there but if we just sit back and wait for the universe to deliver them to us it’s a wasted opportunity and it might not happen. This is why I always suggest taking a proactive approach to your journey.

If you’re reading this then you’re at least aware of the twin flame journey which is obviously an important step and puts you in a very good position whether it ends in marriage or not.

I’ve spoken to literally thousands of people on various stages of their twin flame journey. Some twin flame stories get shared but the vast majority are kept private.

I can tell you that when it comes to marriage – I’ve probably heard it all. Just in the last couple of weeks alone, I’ve heard:

There’s no roadmap I can give you for your journey ahead. No story is ever going to match your own journey entirely and I don’t want anyone falling into the trap of wishing towards the future and taking their eye of the journey in front of them. 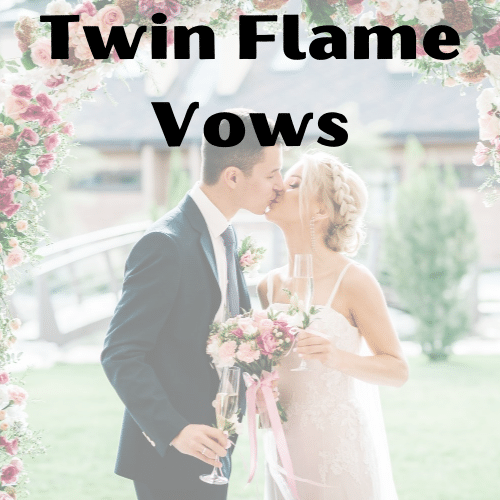 As with any marriage ceremony, the vows at a twin flame wedding make an unbreakable promise to each other.

The actual wording of these vows generally depends on who else is present. Rather than trying to explain the concept of twin flames to others present many twin flames choose to skip these words but pledge themselves to both each other and the universe.

A twin flame union is more than just a legally binding document. It’s an agreement to reach ascension together and push each other to new heights – the vows often reflect this even if they don’t use the phrase twin flame at all.

Why It Doesn’t Matter (and What to Focus On Instead)

When I say marriage doesn’t matter, I’m not trying to dismiss the idea of marriage itself. For many twins, marriage is exactly what they want and gives them a chance to formally share their love for each other with the rest of the world.

When I say it doesn’t matter, I mean you shouldn’t worry about marriage in the future when you have work to do in the here and now. Focus on reaching union with your twin and the rest will follow suit and sort itself out which will include marriage if that’s what you want. If you’d like some guidance on this, take a few minutes to share your path so far: