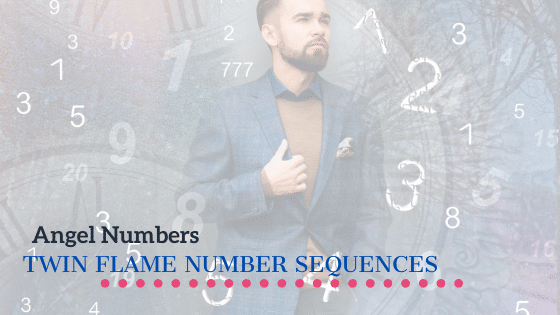 I’ve spoken a lot about signs and symbols you can look to for guidance on your journey but twin flame number sequences can provide specific guidance on what you should be doing to further your path towards union.

You’ll have to bear with me on this one it’s quite long but twin flame numerology is one of the most useful tools to further your twin flame journey together and we have quite a lot of ground to cover:

Remember that no two twin flame journies are ever exactly alike. I’m going to try and cover as many combinations as I can but if you’re looking for specific guidance for your journey then condier getting a twin flame reading.

What Are Twin Flame Numbers?

The easiest way to describe these patterns and sequences is a sign from the universe. Number patterns start appearing so consistently and against all the odds that they get your attention.

And that’s kind of the point.

Often called angel numbers these patterns stand out because it’s statistically unlikely you’d see them if something wasn’t intentionally placing them before you. There’s some debate on beliefs and where these numbers truly originate from whether that’s your twin, your higher self or even something completely external (like your spirit guides) but who is less important than the why and how they can lead to twin flame union together. 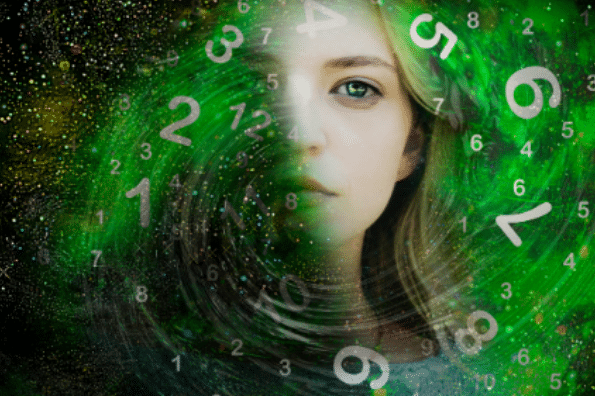 These patterns are so unlikely (we’ll get to where you might see them in a moment) that they get your attention. They show up to try and tell you something and they’re most intense when you have an important decision to make.

They provide guidance and reassurance.

They won’t always spell out exactly what we want to hear in plain English, but they are there to help. The actual meaning of the number pattern is where you can get more specific guidance but the fact that you’re seeing them at all is a very positive sign that you’re on a true twin flame journey.

Angel numbers exist outside of twin souls but the fact you’re seeing these patterns and have arrived here is a very good sign of your road toward divine union. I do think it’s important that you listen to the message of the number patterns and don’t just sit back and wait for the universe to do everything for you.

There’s a meaning to these specific number sequences and we’ll look at that in a moment.

Where Do You See Twin Flame Number Sequences?

You might see countdown patterns (like 54321) or repeated numbers like 333, 222 and 111. The more unlikely the combination or more repeated the message – the more the pattern is trying to get your attention.

An angel number could appear anywhere. There are no hard-set rules here and the more complex the pattern the less likely you are to spot it. After hearing (literally) thousands of twin flame stories there are a couple of common places you might spot them:

Seeing patterns in different places can change their meaning – but we’ll look at that a little later on.

It’s actually likely they started showing up in your twin flame journey long ago and you just didn’t notice them. The further you progress on this path the more you’ll start to see them.

Does My Twin Flame See These Number Sequences?

This is a tricky one to answer.

The answer is technically yes because anyone going through this kind of spiritual connection (whether it’s a twin flame journey or otherwise) is likely to be guided by angel numbers. It’s likely that these combinations are showing up for your twin as well (especially if they’re closer to awakening).

The problem here is they’re less likely to notice number patterns and synchronicities if they’re the runner because they’re (commonly) less spiritually aware. If you’re going through a separation phase it’s entirely likely these patterns are presenting themselves to your twin and they’re totally oblivious to them.

It’s always hard to speak in specifics about a twin flame journey because the fact is no two twins are ever alike.

This is important: Just because you do not see one or any of these sequences does not mean you’re not in a twin flame relationship. The journey is different for all of us and it’s incredibly rare to even be at this stage let alone seeing any of these numbers.

If you’re seeing these numbers take their message on board but don’t panic if you’re not. These are just some of the more common number patterns there’s an infinite combination out there.

But angel number 1010 has such a specific meaning for twin flames it’s one you can’t ignore.

Remember that the entire journey toward harmony with your twin is about first healing yourself. If you’re seeing this pattern it’s a powerful omen for spiritual awakening and twin flame union but it’s not a message you can ignore. Continue to focus on yourself and work on your own spiritual path. 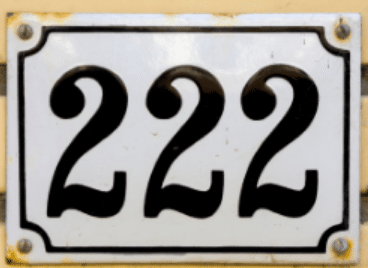 Patterns with heavy use of the number 2 such as 222 and 22:22 call for faith and determination. A reminder that the twin flame journey is rarely an easy one, and sometimes a little motivation is required to keep us on track. Especially during periods of difficult separation, any pattern with the number 2 is there for reassurance.

Sometimes this can be a message from your subconscious, your twin flame, or even the universe itself. A reminder of the path you need to follow and why you’re here.

We’ve covered the 222 twin flames number in more detail because of how clearly it spells out a twin flame journey but it’s not a sequence that suggests the end of the journey quite yet. It commonly appears when things are about to change or you’re about to move on to a new phase but it’s mostly a reminder to keep going. Like a cheerleader sent by the universe.

Sequences with the number 3 (33, 333 and 3333 for example) are a powerful sign of union. While other patterns provide guidance or reassurance for the general day to day the 333 pattern is a powerful reminder of your spiritual mission and why these challenges are placed before you.

If you’re able to keep this in mind and focus on your purpose and spiritual advancement then the significance of this pattern is perhaps one of the most exciting you could see. It’s a symbol of manifestation and higher power,

The twin flame number 4 sequences commonly mean love and passion. That strong power that drives you both to each other. It can herald a coming of physical contact or leftover energy from the last encounter.

Much like other twin flame telepathy that we have covered before a twin flame relationship is never that far from your mind, it’s just the less spiritually aware twin doesn’t notice it.

At least, they don’t consciously notice it. There’s a difference.

Seeing numbers like 44, 444 or 4444 is a sign that your twin flame has you in their thoughts. Usually during periods of high emotion, for whatever reason, their mind has likely gone to you when you see this pattern. 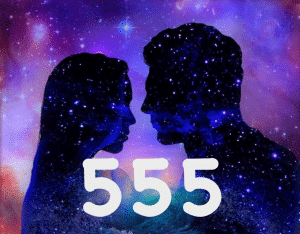 In twin flame number sequences, one I always like seeing is number 5. A sign of imminent change and you need to prepare yourself. 555, 5/5/5 or 55:55, for example, are strong indications that something is about to happen.

Some numbers are a call towards taking the long view of the journey but a pattern with 5 is usually talking about a much shorter time frame. It might not mean an immediate union but it’s a strong indication something is about to happen on your journey.

This pattern gets a bad rep from biblical references but those references are not talking about twin flames. This is a very high energy pattern to see in numerology. It’s considered the ‘number of extremes’ and not a sign of half measures.

6 is the number of creativity and expression. Perhaps it’s time to express your love and feelings or a sign that your twin is subconsciously sharing their feelings with you. 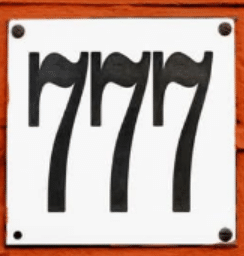 7 is a call for awareness and spiritual awakening. A sign we want to see from the runner flame, but the pattern can also appear when we spiritually evolve ourselves during any phase of the journey. It’s a sign of progression and while maybe doesn’t herald an immediate change like the number 5, it’s a reassuring sign that you’re taking a step in the right direction towards union.

Because the 777 pattern is one of the least common ones (in my experience) I had to call in a little help for this but my friend did a guide in the  777 angel number and twin flames here.

717 is one of the rarer angel number patterns I hear about (and I hear a lot of twin flame stories). 7 is a strong sign in a twin flame journey; heralding awakening and patterns like 7/7/17 or 717717 are more substantial versions of this.

It calls for the leader twin flame to start pulling things together toward union. It doesn’t (sadly) mean that union is going to be easy at this stage, but it is a sign that action should be taken.

The number 8 in angel numbers is a sign of abundance and success. On the plus side, it’s good news however the 888 pattern is possibly one of the hardest to decipher any kind of meaning for your journey because it’s such a general message of success. It could be in any area of your life.

It ties into the twin flame journey as being the symbol of infinity, A symbol of the yin and yang of you and your mirror soul. A symbol of the bond between the two of you lasting far beyond this single lifetime.

Seeing 88, 888 or a very uncommon sequence like 8888 is the universes way of saying multiplied by 8. It’s a pattern of huge abundance.

It’s impossible for me to account for every single pattern you might see. I’ve tried to cover some of the more popular ones I’ve seen or heard of in my own experience but if you’re seeing one I haven’t covered here already then leave a comment below and I’ll try and get it added.

What Should I Do When I See Twin Flame Number Sequences?

Spotting twin flame angel numbers is the first step but what should you actually do when you start seeing them?

Well, the first step is doing the research and understanding the meaning behind the different types of patterns (so far, so good). We also need to start looking at the situations where you see these patterns and not just the numbers themselves.

When, where and what surrounding the patterns might be telling you more than the numbers alone. For example:

What else is going on around you?

The angel numbers might just be trying to get your attention towards something else going on around you. When you see these patterns looking around and see what else is standing out to you.

It might not always make sense to you immediately but if you’re seeing these numbers consistently take note of them. Write them down and try and remember everything you see, think and experience. You’ll soon unlock the patterns.

Twin flame numbers in themselves are not simply answers. Few things in a twin flame journey are that easily spelled out for us so angel numbers are intended to be a form of guidance. A small nudge in the right direction. Take what meanings and guidance you can from them but they are not the be-all and end-all of a twin flame path.

Alternatively, if you’re looking for more specific guidance on your journey ahead take a moment to provide the details of your path so far and get a twin flame reading.

2 thoughts on “The Ultimate Guide to Twin Flame Number Sequences”