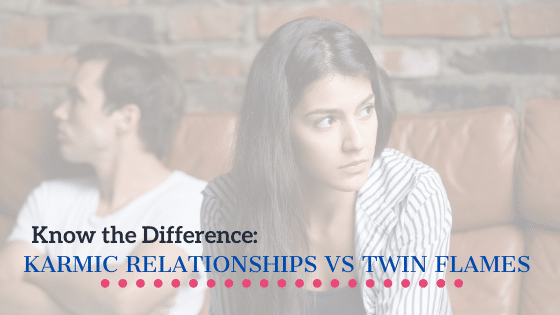 I’ve written quite a bit on the wonders and benefits of a twin flame journey but it’s also important to understand the darker side of the journey. Understanding the difference between a karmic relationship vs twin flames is important. Very important.

We’ll get into the details of a karmic relationship and how to tell the difference in a moment but the main thing to need to understand first of all is why it matters. A karmic relationship is, at its core, a false twin flame. Something which can seem so real and so right – right up until it doesn’t.

A karmic relationship can have a lot of the same early markers as a real twin flame path. From the intense attraction and patterns surrounding the two of you to a perception of the same subconscious communication between the two of you.

But karmic relationships can be very, very dangerous.

Firstly on a spiritual level. They’ll hold you back from furthering your own spiritual journey. It won’t always be obvious at the time but a karmic twin is going to find reasons to take your focus away from anything which might further your spiritual advancement. Also, the obvious, they’re going to distract you from finding your true twin flame.

It’s also entirely possible for a karmic twin to be emotionally and physically harmful. This isn’t always the case but in the many, many twin flame stories I hear I’d say it’s probably more common than not.

Perhaps a karmic relationship phase of your journey is all part of the plan. Sometimes it takes a destructive force to awaken something in us but it can be difficult understanding if we’re dealing with a karmic relationship or a rocky phase in a true twin flame journey. If you’d like some help navigating your path together, consider getting a twin flame reading.

What is a Karmic Relationship? 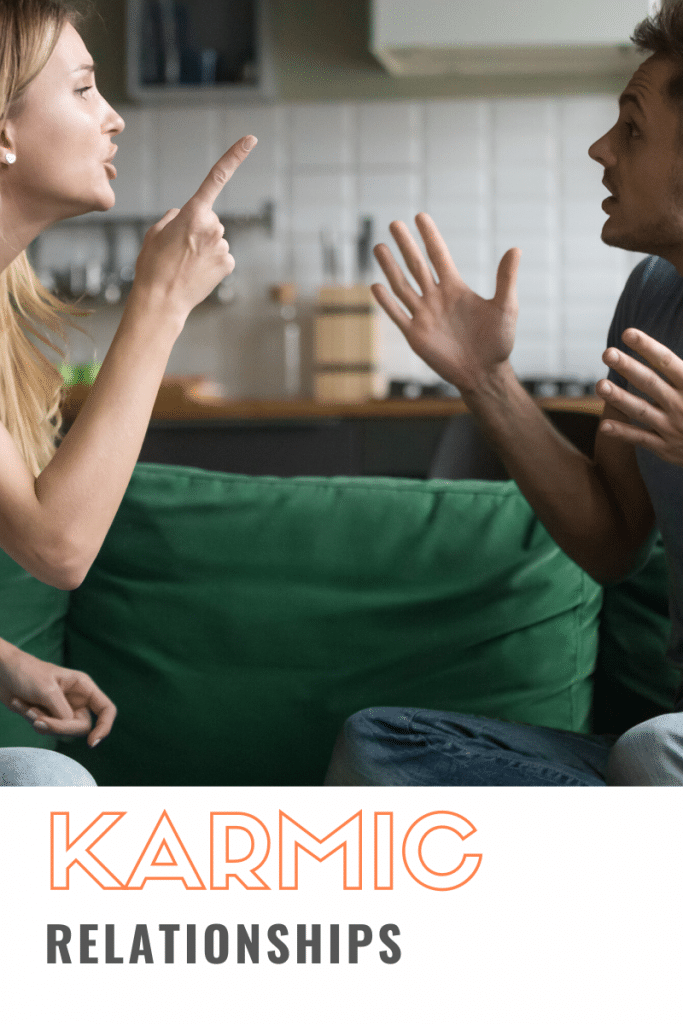 First of all, I think it’s important to understand that karmic relationships are not evil. They don’t act maliciously towards you or try to punish you. It’s entirely likely that you could be a karmic flame to the wrong person as well.

The reason there’s so much overlap between twin flames and karmic relationships is we experience that same initial pull. I spoke recently about the twin flame intense attraction and it’s very common to experience the same thing with a karmic twin.

Karmic relationships happen when your souls are pulled towards each other sensing there’s growing to do.

It’s entirely possible for you to have met your true twin flame and for them (or you) to fall back to a karmic partner because they haven’t yet completed this growing. Even if you do get out of a karmic connection, you’ll likely just wind up back in another one if you haven’t learned the lesson yet.

It’s a loop that (sadly) repeats itself far too often.

Just like soulmates (I’ve also covered the difference in twin flames and soulmates before) it’s entirely possible for you to have more than one karmic relationship. In my experience, it’s likely in fact.

The quicker you’re able to break out of this pattern by focusing on improving yourself and your own spiritual journey the quicker you’ll be able to reach union with your true twin flame.

What are Twin Flames?

You can skip this section if you’re already familiar with the idea of twin flames and move further down to telling the difference.

Twin flames are fragments of a larger soul entity if you’d like. There’s an indissoluble connection between them because they are both parts of a large whole entity. That’s why, when they are remotely within proximity of one another, they will invariably gravitate around each other. And yes, you’ve guessed it, such an intense is bound to stir up all sorts of stuff.

Because there’s such a deep soul connection and because there’s a deep kinship between such partners, as they are literally part of the same higher consciousness, there’s an inescapable pull which is going to trigger a lot of shadow aspects within the partners. The connection is almost visceral, based on similarities which can at times be uncanny, and it can bring out the worse and the best in them both – often, at the same time, in fact. In that regard, the twin flame connection has a deeply karmic component to it.

Even though it can go through such a karmic stage though, if the partners have done enough work on themselves and are high-vibrational enough to be able to heal and overcome all that triggering, the effect is that of intense and deep cleanse of their energetic bodies.

Their vibration grows higher as a result, and it launches them both on an upward spiral of high vibration. Should the union be successful, the twin flames merge into a high vibe entity which is all the closer to getting into unity.

In a sense, a karmic connection is like an upside-down twin flame connection, where the result of the partners coming together is that of downgrading their personal vibration instead of upgrading it.

Because the end result depends largely on how much work the partners have done on themselves and how much work they’re able to do once they come into contact, a twin flame connection can end up remaining at the karmic connection stage. So a twin flame connection is karmic and could remain that way, unfortunately. But if both partners are prepared to put in the work and grow, they use that karmic stage to propel them forward on a journey of growth and ascension.

Can a Karmic Relationship be a Twin Flame?

Much like the denial or bartering phase of grief, I’ve been asked this more than a few times.

Just because you’re struggling with a runner twin flame or a tough phase doesn’t automatically make it a karmic relationship. It’s an important distinction to make. Sometimes a twin flame journey sucks too. It can be emotionally, spiritually and even physically painful.

– Both the karmic and the twin flame connection trigger shadow aspects of both partners, giving them the opportunity to grow as a result.

– These connections can be quite intense, especially in the beginning, and maybe heavily based on sexual attraction and chemistry.

– In some cases, both types of connections can be quite traumatizing, especially if the twin flame connection doesn’t have the desired growth and ascension effect on the partners and essentially remains at a karmic level.

– In a sense, both karmic and twin flames connections can start off as karmic connections. But while the karmic one will stay that way and is likely to take both partners on a downward karmic spiral, the twin flame connection transforms into a blossoming connection once both partners have processed their shadows and karmic issues enough to get to the true flame union stage.

Twin Flames vs Karmic Relationship: How to Tell the Difference

Now we get to the tricky part. It’s one thing to know the theory behind the difference but it’s quite another to tell them apart when you’re there. Both twin flame separation phases and karmic relationships can be very emotionally charged. A lot of the same indicators and patterns arise.

Some things you can try to look for:

I’ve seen a lot of different opinions on how to figure out when you’re on a false twin flame journey with the wrong person. I’ve spoken to thousands of people now and heard their stories and struggles. I think one of the most important things to remember is that twin flames build each other up. They push each other to improve even in the tougher stages.

One of the clearest and most common signs of a karmic relationship (or any type of false flame for that matter) is they’ll be more resistant to you changing and improving yourself. When it’s a true twin flame connection they’re more likely to be your cheerleader and join you in your path to self-improvement.

You can also look for signs and patterns from the universe, follow your intuition or take a few moments to do a twin flame reading which can help give you some guidance.