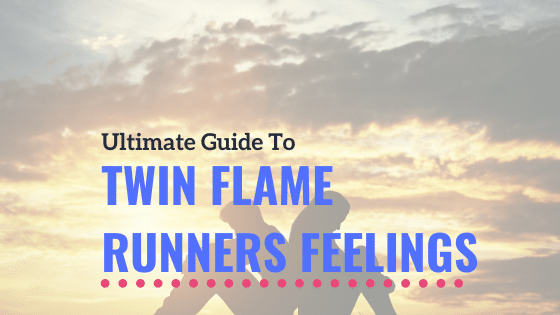 Where there’s a twin flame journey there’s almost always a twin flame runner. The separation stage is possibly one of the hardest emotionally, spiritually and sometimes even physically.

While you’re going through all of this it can be hard to try and understand the twin flame runner’s feelings. Why are they finding this so easy? Do they not feel the same way as you? Why don’t they see what you see already?

Most of the stories and articles we write here focus on the chaser because they tend to be the more spiritually awoken twin and (generally) that’s who are readers are. Understanding how the runner twin feels is important in making a separation stage easier for both of you however so it can be worth considering.

The feelings the runner is experiencing are just as valid as our own. Even if we can’t understand why they’re running we need to understand that this is not necessarily easier for them just because they’re running.

We’ve covered soul shock before but, if this phrase is new to you, we can boil it all down into one line.

Your twin flame runner is scared. This is like the heartbreak of a breakup – on steroids.

It’s perfectly normal to react to their behavior with confusion, disbelief and even anger but they’re not trying to harm you. Soul shock is a powerful obstacle on almost every twin flame journey and isn’t easy for either of you.

While you (as you’re here) know enough about the journey to use resources and reach out to people for help dealing with soul shock – the twin flame runner doesn’t have this. They’re very much feeling alone and in the dark not knowing where this pain or coming from or what to do about it.

Essentially, this is why they run. Their knee jerk reaction is to try and getaway. Speaking as someone who used to consider himself a firm cynic when it came to anything like twin flames – soul shock is the perfect term for what the twin flame runners feelings. People give it different names but it really boils down to confusion. When it hits you – you know it.

The runner is (usually) the one who either doesn’t know anything about twin flames or doesn’t believe (or isn’t sure) that this is actually it. The soul shock affects both the chaser and runner initially with the intensity of their connection but it’s enough to cause the fear and confusion which causes the runner to… well, run.

Dealing With This Stage

Both twins struggle with this stage in different ways. The quicker you can draw it to a close the quicker you can save both of you time and pain. It could be that one (or both) of you still have some things to work out. It should be time for you both to reach the next stage and it’s just a waiting game.

Because journeys vary so much a twin flame reading can help pinpoint exactly where you are and where you need to be. By looking at your path specifically rather than general knowledge of twin flames in general. It doesn’t hurt to further your general knowledge either however and understanding the stages and watching out for signs like twin flame telepathy is also important.

Does the Twin Flame Runner Regret This?

I’ve spoken to a lot of people both before and after the union phase of their twin flame journey and honestly? I can’t think of a single time when I would say a twin flame runner honestly regrets that period.

They won’t have enjoyed it while it was happening and looking back they would probably rather have more time to together however that phase was all part of their journey. Trust me. I understand this stage of the journey sucks for the chaser. It isn’t a picnic for the runner either remember – but it’s not something either of you is going to regret in the future.

It’s all part of the journey of how you got from where you are now – to a union.

The truth is they’re trying to help you when they run. They (subconsciously) might feel like you’re not ready yet.

While there are patterns and signs true across all spiritual journeys there are no two journeys that are entirely identical. We share twin flame stories so that readers can offer advice and apply lessons to their own situations. If you’re currently the chaser (or perhaps you used to be the runner) please share your twin flame story with us!

I love the topic of twin flame runners because it’s not a topic that often comes up. Any kind of separation between twin flames can feel rough and hard to deal with. This can make it hard not to blame them or feel like the runner is trying to hurt you.

The Twin Flame Runner During this Stage

If I had to sum it up in one word – scared. Twin flame runners are almost invariably scared (whether they realise it or not). While the separation stage might be good for you both in the long run it’s generally still fear that causes the runner to run.

When we look at what you can actually do to help the runner – keep that in mind.

Typically, you are both runners, just in different ways, or sometimes at different times (it can flip flop). It’s very possible to be a runner and not realize it. I’m not so sure rejection is the correct term for it although it could very possibly feel as though you have been rejected. Sometimes the situation between the two does the “rejecting” for them. Sometimes the intensity is too much, causes so much fear it’s difficult to face the other.. remember you are a clear mirror for the other. It can be painful to see what one really looks like.

(Editors note: I know we commonly talk about twin flame runners and twin flame chasers but bear with us here).

Often the experience with the divine (not your twin themselves, but the divine within the connection, within each twin) is self rejection, because of the love and perfection of that love people feel unworthy of it, seeing their imperfections, they can’t or don’t feel they can measure up, or there is a fear that one should be allowed that.. it’s too good to be true type feeling. There’s also fear of the work, the inner self work that needs to be done in order to come closer to that love. Depending on where you are, that can be a lot of work, and people often reject that alone. Life was easier before you met the divine and there can be a lot of confusion and resistance to what needs to change. I think we often want to say that we have been rejected, but if you were to have a closer look, or knew all the facts, you’ll probably see there was no real rejection there… except maybe egoic, which is a false sense since it’s not rooted in the spiritual. The ego seeks to protect self…. this is actually not a bad thing, (you don’t get rid of it) except it’s not good when it steps over the line and over the divine. This is probably a lifelong battle. One must develop a sense of prudence in handling ones ego. You don’t get rid of it, you fashion it towards the divine love. It’s a practice. Being in a twin flame connection helps intensify this practice. Because you have been made aware of it and can’t deny it, it fashions you, but one can reject the lesson.

The more one is living life in ego and not spiritual, the more difficult this can be. By the way, you yourself could be more living in your ego and not realize it, thinking the other is more “guilty”. Divine love doesn’t do this. It’s rooted in truth. It does not seek to blame!!! (So if you’re doing that, this could be part of the problem!). When you say, my twin is guilty, they ran away from me, I’d be willing to bet there is something you are doing or not doing that is just as guilty. You’ve really got to look inside, get right with God. This can be blocked when you believe the divine rejected you, which is how it can feel if you believe you’ve been abandoned by your twin.

So, to kind of answer your question…. The egoic rejection of the other can feel like a relief, but it’s not really because you still love the other immensely, it’s the intensity that one is getting relief from by stepping away. And sometimes that is needed. If you love the other as you really say, you allow space, or “hold space”. Be careful of judgments… like thinking you’re the good one and the other is bad. This will seize things in that place, prolong suffering. Blame and finger-pointing is going to get you NOWHERE. I often think this is the first hurdle to overcome.

Spiritual people (the ones more likely to be reading up on the idea of twin flames for example) tend to be the chasers which explains why most of the guides and stories are from their point of view. We’ve already looked at the twin flame separation stage in some detail – more than a few times.

Their feelings that the twin flame runner experiences are just as valid and just as important. They’re not trying to hurt you. Generally, they don’t even understand their feelings or their decisions and it’s purely the subconscious at the steering wheel.

I often see people struggling with feelings of hurt and resentment. It’s understandable but this kind of negative baggage is going to slow down your journey to be together. I generally suggest trying to see it from their point of view, which must be scary, if you think about it. After all, they are still experiencing all the life-changing effects of the twin flame relationship, yet they don’t fully understand or believe in the whole process.

The Duality of Twin Flames

It’s hard to understand what the twin flame runner is thinking. I know first hand exactly what it takes but remember they’re hiding their feelings and emotions not just from you but from themselves as well. It’s hard to cover so many different journeys in just one post and there are an unlimited number of different variations that might be coming into play with your journey. Try to take as much time as you can to understand what’s going on and watch for signs and similarities in your own situation.

Twin flame duality is not a topic which a lot of people talk about. With a true twin flame, this brings in the polarity of the physical world largely ego-driven through no fault of our own and the duality of their higher spiritual self. Every twin flame is one half of a soul and this polarity will strongly affect you both.