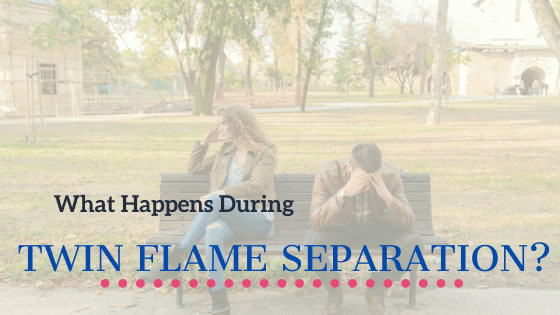 The twin flame separation stage is a very different thing to a normal relationship separation. Like, night and day different. It can feel awful like our entire lives have been shattered in the blink of an eye.

The same intense burning love that makes a twin flame relationship so intense is the same thing that makes any sort of spit or separation so unbearable.

Finding your Twin Flame is worse than finding a needle in a haystack. Dealing with the myriad of problems in getting through the next stages can (somehow) be even harder. So many questions and so few answers. How do you know if you’re doing the right thing? This free audiobook download has pretty much everything we know on Twin Flames and should keep you on the right path.

But assuming you know the rest of it – let’s look at the separation stage. What happens and (most importantly) what you can do about it. Does it Have to Happen?

Technically, separation is not a set ‘stage’ of every twin flame journey. There does not have to be a stage where the two of you are apart. I’ve had more than a few viewers contact me already worried about this because they hadn’t had this period of separation and they assumed it must be coming.

It certainly is common – but it doesn’t happen in every journey. So please don’t start expecting it to absolutely happen. You’ll just end up causing it. It’s entirely possible for twin flames to share the entire journey together – but it really doesn’t matter either way.

Who is To Blame for the Separation?

Yeah, this is another important factor in the separation stage. You’re not to blame and (just as importantly) neither are they. It’s a neutral process but unfortunately, because of how much it can hurt, we tend to project this hurt and it becomes blame.

It’s understandable, it happens but it really won’t do either of you any good. The sooner you can break that habit the better. Negative baggage like this will only help the separation last longer.

Some people report feeling shivers during the twin flame separation stage. It doesn’t seem to be a consistent phenomenon but it’s frequent enough to be a factor. This is an example of  the kind of experience people go through:

Not every day. I often feel electrified by him, as if he was really touching me. Hugging me. Kissing me. As he was real. Physically with me. Then I feel pressure in the abdominal area, sexual chemistry and most of all, a kind of fear (not real as usual) whenever I think of him that we are going to meet. It’s the kind of fear that you don’t know how to react, after all those mad days and now months without seeing him. It floods me like a tsunami many times a day. But overall, since we didn’t cut contact hurtfully, and I have a chance he will want to contact me again, I don’t hurt – because subconsciously I know there might be a continuation. I can imagine that if there is a little or no hope for anyone out of you there to meet, that uncertainty magnifies your pain.

The whole process is usually combined with a lot of doubt and uncertainty. Are they your twin flame? Why are you separated? And damn the pain that can go along with the whole thing. People do disagree a bit about the whole process from why it happens to what to do about it. Some of the theories are a little far out there but there are some basic guidelines which can help you navigate the whole thing.

We know how intense it can be meeting your twin flame. We’ve talked about it before and while everyone is going to experience it slightly differently when you feel it you know this isn’t a crush or infatuation.

The meeting of two souls who are almost exactly the same vibration, a vibrational match in every way, creates a transcendent experience allowing you to get a glimpse of what heaven is like. Your souls talk to each other, you literally feel out of this world, like you can see through the illusion of this reality. You can experience past life memories, become a healer, a psychic, connect with your guides and angels and the feeling of being intimate together is WOW, I cannot even describe it. When he left I felt like two different people… I was so full of light, so full of love, but also devastated beyond anything I had experienced to that day. I had to find a way through and not lose my connection to the light within me.

One of the most painful stages is the twin flame relationship that of the “Runner and Chaser.” After the initial stages of ecstatic union and fairy-tale partnership, things start to heat up. Egos begin to clash. Core wounds, insecurities and traumas are rubbed raw. Shadow Selves lash out.

As a result, it’s inevitable that almost every twin flame relationship battles through drama and dysfunction at first. Understandably, this comes as a devastating shock. What happened to the perfect, rosy relationship paradise where everything was kisses and cuddles? At this point, many twin flame couples wind up confused and disorientated. Was it all a lie? Was it all an illusion?

The answer is “no.” The intensity you experienced was not a figment of your imagination. The sense of familiarity and deja vu you felt wasn’t a mystical apparition. It was real. Don’t doubt it. It’s simply buried under the layers of your damaged egos.

It could be said that the sole purpose of twin flame relationships is to help us soulfully mature and become the best versions of ourselves possible. In fact, despite how difficult they can be, twin flame relationships are so powerful because they are catalysts of growth. Our twin flames help to ruthlessly expose the dark, disowned, fractured parts of ourselves that we’ve hidden away. Not only that, but our twin flames provoke our inner growth by unintentionally (or intentionally) irking us. The anger we feel towards them is only really a reflection of the anger we feel towards ourselves.

Sometimes one, or both partners in a twin flame relationship become so infuriated and incapable of co-existing that they separate. What is the cause of twin flame separation? We’ll see below:

Life is a process of growth. Not only do our physical bodies grow, but our inner selves grow as well. One of the primary causes of twin flame separation is immaturity. When we’re immature, we have low emotional intelligence meaning that we struggle to identify, manage and cope with our emotions and those of others. Not only that, but spiritual immaturity thrives in proportion to the stubbornness and magnitude of the ego. In other words, the bigger the ego self, the less harmony there is. The ego wants to believe itself to be charming, magnificent, all-knowing, and perfect. But when it is challenged in any way, shape, or form, there is hell to pay.

How Long Can the Separation Last?

This is a tough one to answer. Technically the whole separation stage isn’t really happening. It’s an easy term we use because it makes it easier to explain but you’re never actually separated. That’s just now how twin flames work.

There might be a physical separation between you – sure. But that’s not really what matters here.

There is no set time here. No good or bad. No right, or wrong answer. It might be a lot shorter than you imagine however if you’re able to really understand what’s going on and act accordingly.

The separation stage is kind of like a way for you and your twin to get some space to understand or deal with the intensity of the connection. Especially when we don’t really understand it (it’s not exactly something taught in school) it can be a tough one to get your head around.

How it CAN Be a Good Thing

I know (first hand) how much it can suck going through this phase. But it might be your (or their) unconscious system trying to protect you and make the whole journey easier in the long run. If it thinks you’re not ready – or maybe they’re not then it can start the running process if it comes to it.

A lot of this entire journey doesn’t actually give you much of a say. The subconscious runs the show for a lot of it – but that’s not necessarily a bad thing at all. This doesn’t mean you should just sit back and hope for the best but it is a good way of reminding yourself there’s a reason for the hurt you’re currently feeling.