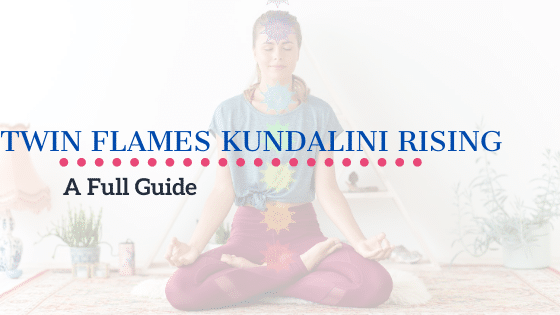 When it comes to awakened consciousness and your spiritual path towards higher frequency vibrations, Kundalini energy is a powerful aspect of your ascension and divine self and when we look at twin flames Kundalini rising and how it affects your journey you’re going to see a lot of overlap. While it can play a fairly large role in your journey toward union, it’s also entirely possible to go through a Kundalini awakening without even having a twin flame out there.

At it’s most basic  – it’s an internal spiritual awakening. It gives us a way of tapping into a deep source of energy within us. It’s a shared chakra connecting between you and your twin. It’s tricky to explain in a sentence, but we’ll get into the details.

We’ll also look at how you can use this energy to help work towards reaching union with your twin. If you’re feeling stuck and not sure how to move on to the next stage this is worth paying attention to.

What is Kundalini Energy?

Your Kundalini energy is your divine feminine energy if you go by the polarized or Yin and Yang philosophy. If you were to locate its core, it would be around your root chakra, at the base of your spine. It’s part of the energy cord that connects you to Gaia or Mother Earth and helps you gain a higher vibration as it grows in frequency and connects you more and more to the higher dimensions as well.

Don’t be tempted to see it as a gender-specific thing, because it’s not. We all have this kind of energy, regardless of our gender – just like we all have divine feminine and divine masculine energetic aspects as part of our personal energetic body, a Yin and a Yang part of ourselves.

You’ll often see it represented as two snakes (representing both the divine masculine and feminine meeting and intertwining) riding up and down the chakras. It dates way back to the Mayan culture and ancient Greece. 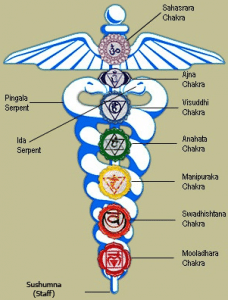 What Does Kundalini Awakening Mean?

Simply put, it’s a process that triggers the activation of that energy “serpent” from the base of your spine. Once activated, it rises upward from your root chakra through the rest of your chakras, activating the energies at each level of your energy body and igniting transformations that involve higher frequencies at each chakra level. It’s both challenging, healing, and enlightening as it happens.

The Kundalini awakening process often involves physical signs or symptoms, and it can be quite demanding for some while others go through it with more ease. There’s really no way to know how it’ll be for you specifically, and it can get very intense. That’s why you shouldn’t attempt it on your own, but rather seek the help of an experienced master, guru or spiritual group or circle that has helped others go through this process as gracefully as possible.

Of course, it can also happen without you even trying to achieve it or even know about it. It can be triggered by anything from intercourse with someone who has gone through it and pretty much ignites your own energy core, to life-changing events, near-death experiences, meditation, mantras, and so on. You may or may not be aware of what’s going on or what it might mean as it happens.

Once you’ve experienced that activation, your energy goes through a process of shifting and ascending, whether you’re pursuing it or simply coping with it. Your relationship with your ego will undergo changes, and so will your connections to the higher dimensions and others around you. You gain access to a higher dimensional love and understanding, and your soul shines all the brighter. You will do all the more powerful work as part of your mission or life purpose, and your mere presence will be a beacon to those around you.

The reason it’s so tightly entwined into the twin flame journey is both heavily involve a journey of self-discovery, reflection and improvement. In fact, the awakening can be triggered by encountering your twin flame. It’s commonly a result of physical contact (whether sexual or not).

If you go through an awakening, it doesn’t necessarily mean you’re on a twin flame journey. It’s entirely possible to go through a Kundalini journey without even meeting or even having a twin flame out there. Meeting your twin will put you through this awakening if you haven’t already been through it.

Keep in mind that the soul’s flame, which burns all the brighter for each twin once they connect, doesn’t necessarily involve physical contact for the twins. While it’s true that it is more likely to occur as part of the actual relationship, the twin flames are in soul and energetic contact in much subtler ways than what meets the eye. 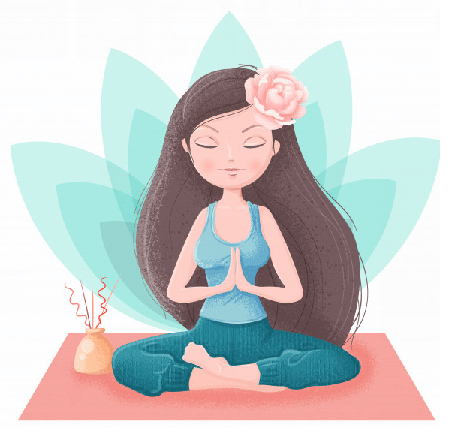 As with any time I talk about twin flame symptoms – remember that there’s a lot of variation here and these are to give you a general idea of the things you might see. This is far from an exhaustive list but should give you an idea of the kinds of things to look out for.

How This Can Help Your Journey

If you’re going through a twin flame separation at the moment trying to focus on this energy and awakening can be a useful way to prepare yourself for union. Working on this awakening is never a bad idea but when on a twin flame journey it’s ideal.

Remember, twin flames are two parts of the same soul so any spiritual work and growth you do will always be reflected in your twin flame.

How to Achieve Kundalini Awakening

While some of us might be fortunate for it to happen without even trying – most of us are going to have to work on it. While there’s a lot of information and opinions out there about the best way to do this, the whole process involves distancing yourself from your 2D body. Pushing your consciousness further and further.

The best way to do this (in my experience) is through meditation. Now, ‘how to meditate’ is a little outside the scope of this post but there’s plenty of guides out there. I personally started by using the free Headspace app which helps ease you into the basics of meditating and there are specific Kundalini guided meditations out there for exactly this purpose, once you’re comfortable with the basics.

As the divine feminine energetic serpent rises up through the chakras of each twin, their connection with each other and their relationships with those around also becomes upgraded. It’s not even a conscious attempt at getting everyone’s frequency higher – their mere presence acts as an upgrade trigger.

The same concept applies to their union and ultimate merge stages. The bright flame of their union grows exponentially as their kundalini energetic serpent rises and transforms their spiritual bodies. They are more and more connected to Gaia and the energies of the universe, receiving and rooting energetic codes and transmuting energies as part of the collective.

When these souls merge, the level of high frequencies which the entire collective basks in is unlike any other. Ripples of such a magnificent effect are felt all through the energetic web that connects us all. The blessings brought on by the merge of the rising ascended energies are felt through the entire grid, and the missions those twins have embarked on are fulfilled in an abundant and quite miraculous way.

Whether you’ve been blessed by the universe with getting into contact with their energies on a more personal level or not, you’ll feel the ripples of that profound miracle and will benefit from their expanded higher dimensional unconditional love.