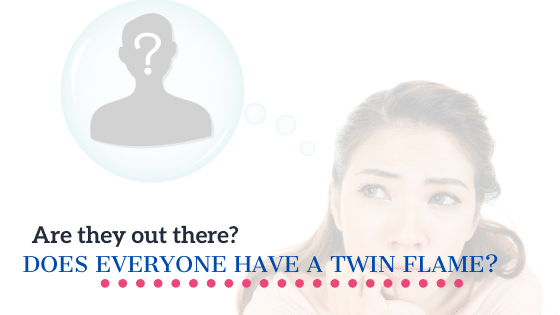 This is an important one. A question I think we really should be asking ourselves more and more often as too many people fall into destructive karmic relationships.

Does everyone have a twin flame?

As with a lot of things in this journey there isn’t always a straightforward answer. If you want a simple yes or no then (if pushed) I’d have to say no. Not everyone has a twin flame.

As the idea of a twin flame picks up and gets spread around social media it’s sometimes a good thing. Drawing attention to this spiritual journey will lead to some successes we haven’t otherwise seen.

I do worry it leads some of us into a trap though. If we chase this idea of an intoxicating relationship too far we’re making it far too easy to fall into a destructive karmic relationship believing it’s a twin flame.

Don’t get me wrong.

I’m not trying to put you off your journey (far from it) and the simple fact you’re here means you’re at least aware of the twin flame journey which means you might well be on this spiritual journey.

Doubt is a normal part of the journey (especially during separation) and I don’t want to add to that but I do think we need to understand the twin flame journey as much as possible.

And you only need to look around at the people in your life to see that we can’t all be on this journey. There are plenty of people struggling with loneliness and toxic relationships constantly. The majority of happy relationships you do see are more likely soulmates (which we’ll touch on a little later).

Who Does Have a Twin Flame?

For some of us, we’re not quite at that stage in our spiritual journey. Not everyone feels that pull towards the other part of their soul because it hasn’t had this split.

Do I Have a Twin Flame?

If you’re reading this then you’re at least aware enough of the journey to be at some stage of spiritual enlightenment.

Most of my readers find their way here because they’re experiencing a connection they don’t fully understand. They might be seeing some of the twin flame number signs which are common with the journey or maybe they’ve gone through something which is triggering a relationship.

I’m not going to say you definitely have a twin flame. It’s a rare connection and the majority of people don’t. At least not yet. I’d say it’s more likely you have a twin flame than someone who’s never heard of the journey before but without knowing the details the best I can say is maybe.

I’ve already covered a more complete guide on how to find your twin flame so I won’t get into all of that again but one of the strongest signs that you have a twin flame is feeling that pull towards something. Feeling like you’re missing a part of yourself because… well, you technically are.

Does Everyone Have a Soulmate?

In fact we actually have multiple soulmates and the majority of happy relationships you see are the results of a positive soulmate connection. We’ve covered twin flames vs soulmates before in full detail but, as a general rule, soulmates are there to help each-other grow.

They can be happy romantic relationships (though there’s not always romance involved) and it’s entirely possible to have both a twin flame and a soulmate in the same lifetime. You’d be incredibly blessed to meet two connections like this in a single lifetime but it does happen.

We all have at least one soulmate out there. We don’t always meet them either but it’s going to be a lot more common than a twin flame. If we dumb it down to just the basics, a relationship with a soulmate is ‘not as good’ as true union with the other part of your mirror soul, but soulmates can live happily together and are drawn to each-other to help heal and grow towards the stage where you’re ready to meet your twin flame in another lifetime.

Does Everyone Meet Their Twin Flame?

This is getting a little more doom and gloom than I normally like but I think it’s important we cover this.

I’ve spoken about twin flame failure already so let’s not get too far into that whole topic again but – this is another case of yes and no.

Once you reach the stage of having a twin flame out there – you still need to physically meet in the 2D. In the long-term then, yes, everyone meets their twin flame. This journey spans over lifetimes and both twins are constantly pulling themselves together (often over impressive barriers) and they will meet.

That said, just because we’re guaranteed to meet over different lifetimes it doesn’t mean we’re guaranteed to reach union this time. It’s entirely possible for failure to happen in a single lifetime which is why I’m constantly saying we can’t sit back and wait for the universe to deliver. We need to actively be working on ourselves to further our journey.

If you’d like some more specific guidance on your own journey then consider a twin flame reading.