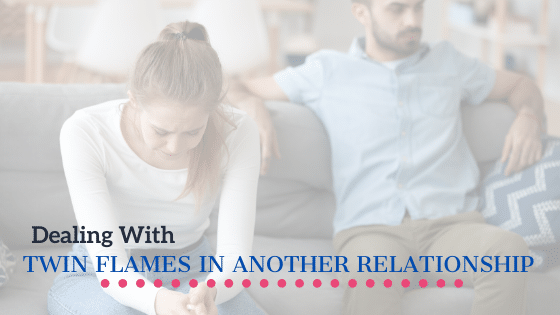 One of the more common questions I get from people early in their journey is what to do about twin flames in other relationships. What does it mean, why does it happen and what should your next steps be?

Well, for those who don’t know me I’ve spoken to literally thousands of people going through various stages of their twin flame journey. I’m frequently saying no two journies are alike and that it’s hard to know anything for sure.

Twin flames being in other relationships is so incredibly common but it comes up so often. I know (from first-hand experience) how emotionally and spiritually painful it can be. You should know, however, it’s also incredibly common in the early stages of your journey

What Causes Twin Flames in Other Relationships?

There’s no one size fits all answer here. I can give you a list of some of the most common I see but your twin might be doing something entirely unique. What is universal is they’re not intentionally trying to hurt you – they likely just don’t understand the path they’re on yet.

If you’re dealing with your twin flame in another relationship and are in need of guidance consider getting a twin flame reading.

Other Relationships Before You Meet

I’ve covered how common it can be when twin flames are already married but (without giving out specific details of course) I’d say that about half the stories I hear about involve at least one twin flame being in another relationship or being married when they first meet.

It’s never going to be an easy situation and I know there are many different viewpoints around this. It’s entirely possible your twin is married to a soulmate which is actually good for them and part of their journey to become spiritually ready for union with their twin.

But it’s never an easy situation to be in. For anyone involved.

It’s not the time to rush them into anything or cause more pain to any party involved. Certainly, a time to proceed slowly as you don’t want a false twin flame connection to rip apart a marriage.

Other Relationships After You Meet

Your twin flame entering a relationship after you both meet also happens. It’s perhaps a little less common than already being in a relationship but it’s far from rare.

Usually, during a twin flame separation phase, it’s possible for one or both twins to temporarily talk themselves out of the feelings they experienced. Usually, they’ll give you (and themselves) an excuse that makes sense to them. Something which lets them frame things in a way they can rationally understand.

Some common examples but certainly not the extent of them:

Usually, it always boils down to the same thing. They’re not yet ready for union. There’s still some healing to do on the path ahead. As painful as this can feel (and, trust me, I know it) it’s part of the journey.

In rare situations, the initial meeting between two twin flames can actually cause a temporary repelling force and push you apart. I’ve covered this when looking at the twin flame intense attraction that initial energy doesn’t always manifest in love or even physical attraction. It can actually feel like revulsion when we don’t know better and, for a time, can push you into the arms of something which seems more ‘normal’. Rarer, but it happens.

Can Your Twin Flame Marry Someone Else? 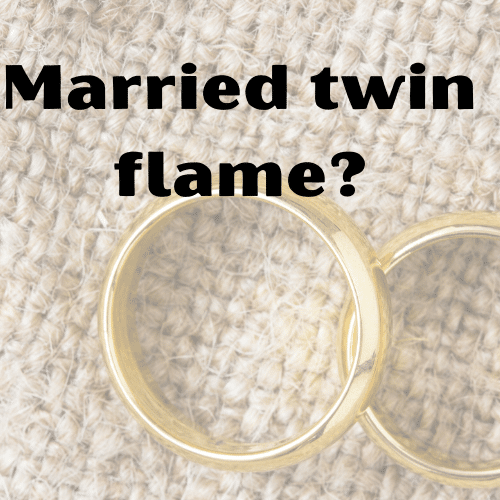 I’m aware there’s sometimes some discussion around this but I think I’ve seen enough twin flame journies to easily answer this one. Yes. Your twin flame can marry someone else either before or after their initial meeting with you.

It sucks. It’s painful. It won’t make sense to the twin flame chaser and you’ll feel like screaming at the universe out of frustration.

But it’s part of the journey and it does happen.

Can Your Twin Flame Fall in Love With Someone Else?

This question is a little more complicated.

I’ve covered the idea of false twin flames before and why they can be so dangerous so I won’t get too far into the details there but it’s entirely possible for your twin flame to fall in love with someone else.

Now, that said. It’s not the same thing as the kind of connection they would have with you. The problem is they don’t know that. This isn’t a logical decision, it’s hard to even call it an emotional one – it’s a spiritual decision.

Your twin flame might be entirely unaware of the journey, they might be waylaid by a false twin flame or they might be subconsciously aware and their understanding of what a 2D relationship ‘should’ be is just causing them to fight it tooth and nail.

I’ve certainly seen situations where twin flames in another relationship were clearly unhappy there but still unprepared to do anything differently because they just weren’t ready.

What to Actually DO About Twin Flames in Other Relationships

If you’re the twin flame chaser and it’s your twin flame in another relationship you might have even skipped straight to this section.

While this might be part of the journey, that doesn’t make it any easier but this isn’t an area where you’re going to be able to reason with them. On some level, they’re entirely aware of the journey you’re on but that doesn’t always translate well into their actions on the 2D. Especially in the early stages.

There are two things you should not do at this stage.

Firstly – don’t entirely write of your twin flame. Just because they’re in another relationship it doesn’t mean this isn’t a true twin flame journey. It just means there’s a painful obstacle you’re both going to have to deal with at some stage.

Secondly – do not try and interfere with their relationship.

It might be tempting but aside from the harm you’re going to cause to the person they’re in a relationship with it’s likely going to drive a further rift between you and your twin flame.

If this is your twin flame then the other relationship is going to end. The only thing you need to focus on is progressing your own journey. Stay open to your twin flame and follow the signs the universe presents but focus on your own spiritual growth. As frustrating as it can be – it’s the best thing you can do for both of you.

If you want some further guidance, take a few minutes to get a twin flame spread on your path ahead: