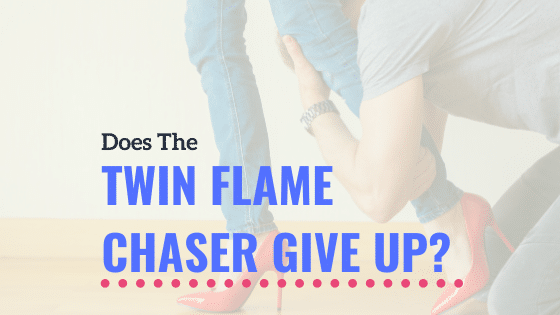 Considering the more spiritually awakened person is the one more likely to be studying the twin flame journey it’s unsurprising that most of the people I talk to are the chaser. But if there’s one question I get from runners it has to be why does the twin flame chaser give up?

Or maybe you’re the chaser and you feel like giving up. Does that mean it was a false twin flame connection to begin with and you’ve been wasting your time? Is this normal? What does it mean?

Navigating the twin flame journey is tough. So many questions and so few answers. How do you know if you’re doing the right thing?

If it’s specific advice for your journey you want I suggest a twin flame reading but I thought it was time we took a look at when the chaser feels like giving up (note: this is not the twin flame surrender stage – that’s something very different).

Do You Feel Like Giving Up on Your Twin Flame?

If you are the twin flame chaser and you feel like giving up on your runner I get it.

Being the chaser can be emotionally, spiritually and even physically painful. Even if you don’t feel like giving up you might be hoping you do just so the pain goes away.

It’s not at all uncommon for the chaser to ‘give up’ at some stage.

Sometimes the chaser might give up and begin another relationship with a soulmate or other false flame. It doesn’t mean you’re not on a true twin flame journey together it just means this phase of ‘giving up’ is part of your journey together while you both work towards being ready for union.

Firstly, I’d ask you to make sure you understand the twin flame runner’s feelings. They’re not intentionally trying to hurt you. In short, they likely don’t understand their own actions and they’re just acting out of self-preservation trying to deal with a connection they’re not equipped to even expect.

Can You Give Up on Your Twin Flame?

It really depends on what we consider ‘giving up’. In the long-term, you can’t quit or give up your twin flame. All the chaser can do is stop chasing and surrender themselves to the universe. Twin flames are still mirror souls and that simply doesn’t go away no matter what either of you do.

You can’t force yourself to move on from a twin flame because that connection is always going to be there. Freeing yourself from the chase and giving yourself time to focus inward is actually an important part in moving towards union – but we’ll get to that in a moment.

Did Your Twin Flame Chaser Give Up?

Perhaps you’re one of the rarer twin flame runners who are aware enough of the journey to be here. The majority of my readers are the chaser and if you’re aware enough at this stage it’s a great sign of the potential to reach union this lifetime.

If your chaser seems to have given up it’s not that they’ve lost their feelings for you or that your journey has failed. It can actually be a good sign that they’re taking this time apart to focus on themselves and their own spiritual path to be ready for union.

You should be doing the same.

There’s never a clear roadmap for a twin flame journey together. It might be that nothing happens for a while and you come back together to repeat the separation process, it might be that you’re right around the corner from union.

Another common scenario that is sometimes overlooked is the roles can reverse.

… which also means the twin flame chaser becomes the runner. Once you’ve had a taste of the connection between a twin flame nothing else is ever going to compare in the long run. You might go through periods where one (or both) of you find yourselves with false twin flames in other relationships but it won’t last.

Now, this does not mean you should give your twin flame the silent treatment the moment they annoy you and expect them to immediately chase, but over the course of the journey, this role does reverse.

Until fairly recently I’ve been the chaser to my twin flame runner. I’ve been through hell and back. DNOTS far to many to count and I thought they would kill me. But they didn’t, they transformed me. The really amazing thing is that my runner twin flame will have experienced that as well, muted because has kept herself amazingly busy with everything she could but they were there at the back of her mind and in her soul. As soon as I surrendered and stopped chasing, she would have felt those changes. While I was feeling more positive personally, I was still feeling quite negative for the relationship, as I believed I had only really come to grips with things for myself. But only very recently, I discovered I was feeling quite happy with myself and I came to feel there was a prospect of seeing her again soon. These are things that we both would have been experiencing, and in particular, she would have been experiencing because I had stopped chasing.

Runners run because chasers chase. On some level it gets as simple as that. The runner is running from the connection, embodied by the chaser. But they can’t run forever, the pull is too strong. The only reason some run at all is because their chaser won’t stop.

So yes, if you ‘give up’ on your twin flame relationship and partner, you will actually be surrendering to the Universe, to the twin flame journey, and your twin flame runner will feel it. In time they will come back, so there is nothing you need do but wait and keep looking into your heart and soul for guidance.

You can see more advice like this on Quora.

I’ve covered the twin flame runner’s feelings in detail before but sometimes we tend to gloss over the feelings of the chaser sometimes just assuming they’re going through something worse.

Understanding what’s going on and what the chaser should do might be easier if you understand what the runner is doing.

Both from first-hand experience and from the thousands of people I’ve spoken to about their twin flame journey, I know how frustrating and painful this stage can be.

But it’s important we understand that it’s not only part of the journey – it’s an important part.

The twin flame runner goes through at least one periods of intensity and while it’s easy for us to think they have it easy – at least you understand what’s going on. They’re usually not spiritually aware enough to understand the feelings or connection so they’re pretty much left in the dark.

When the twin flame chaser gives up sometimes it can be the trigger they need to take a breath and begin the process of self-healing which they need to be ready for union. There’s no set timeline for this it’s going to happen when it happens but the chaser giving up is actually an important milestone in your journey.

There’s no logic or reason you can really apply here. The runner might realize later down the road how much more time you could have had together if only they’d figured things out sooner but that’s a lesson they’re only going to learn themselves. It just won’t make sense coming from anyone else.

In the meantime, your role is not to sit and wait for them – but to do everything you can to further your own spiritual path and be ready. If you’d like some guidance on your path together, take a moment to tell me about your journey so far and get a reading:

2 thoughts on “Does The Twin Flame Chaser Give Up?”